[This is an archived post from my old blog or Medium that I was particularly proud of originally published in 2017. All info was correct at time of publishing]

On April 18th it finally happened- after 5 years of fighting I got my hysterectomy!

The build up to it has been absolutely immense; the four months since I found out I was on the waiting list have felt like an absolute lifetime and I’ve gone through every possible emotion in that time. For the last couple of weeks I’d lived in a constant state of terrified and excited, there was even something I didn’t expect in there- grief. But finally the big day came.

I’d made the decision to live tweet the whole experience, some people might think this is odd but I share a big part of my life with Twitter and use it as a platform to talk openly about my reproductive health in order to (I hope) raise awareness, so really it was a no brainer. I used #uterexit and will be using it during my recovery too.

So we packed up all of my belongings (I was told to expect to be in for 3-5 days) and headed to hospital for 7.30 in the bloody am.

Seriously I thought that by having to be there so early it would mean I’d get an early surgery, I have never been more wrong in my whole life. In reality I only had to wait until 3pm but when you’re sitting around doing nothing but waiting (and reading 100 pages about Katherine of Aragon, listening to Radio 2, chatting to strangers, colouring in, writing) for 6 hours that’s a long time. Add to that the fact I hadn’t eaten since 10pm the night before or had any water since 6am that morning and I was getting pretty fed up.

Thankfully Twitter provided a welcome distraction, the outpouring of support and love made me tear up every time I checked my mentions. There was also my ridiculous friends who messaged me constantly with terrible jokes abut my uterus- this might sound harsh but they knew that if they were nice to me I would’ve been in a worse state. There was also a minor distraction in the shape of the PM calling a snap general election- really Theresa will do anything to overshadow me. 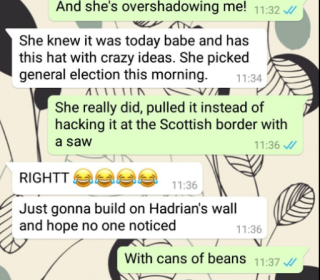 I spoke during the day with various doctors who explained the procedure to me. I was going to have a laparoscopic hysterectomy where they went in through 4 points (my belly button, just above my pubic hair and either side of my stomach) and removed the uterus, fallopian tubes and cervix. Though I’d requested the ovaries be removed too I was shut down because of my age. This one I accepted as the ovaries can help prevent dementia and bone problems. I was glad they were taking away the tubes and cervix as I’m currently being tested for the BRCA2 gene which is known to cause “female” cancers.

The whole day I wasn’t very nervous, I was anxious sure but I never doubted my decision or thought of cancelling it. Even waiting on the bed in the anaesthetic room when a panic attack was threatening to take over my body I kept thinking how much better my life would be without this horrible thing inside me.

I was woken up at some time around 5, my first words were to my boyfriend who I had apparently been having a dream conversation with about him not giving me cheese. Very me. I was kept in recovery for an hour and a half, during which I was confused and upset a couple of times. The pain was very severe but I was also given morphine which made me all warm and fuzzy. The one thing I remember clearly from recovery is when the nurse showed me a photograph of my uterus. I proclaimed “oh my god look at the tiny thing!” and burst into tears the way a new mother would.

At 6.30 I was finally taken back onto the ward, to the relief of my parents and partner. I was in a bit of pain and needed more painkillers but I wasn’t sad. I felt relieved. This was finally over.

The first night in hospital was tough because I had to keep getting up to go to the toilet, yet the motion sickness from standing up meant I vomited every time I did. It probably didn’t help that I was obsessively ramming ginger nut biscuits in my face either though.

It’s been 6 days since the operation and honestly I expected recovery to be tougher than this. Sure I’ve had a bit of pain but it’s nothing compared to the excruciating attacks I used to have. Mood wise I finally feel fully at peace, oddly zen. I’ve had a couple of wobbles when the pain  has been bad but I’m so happy in my decision.

If you want to see a photo of my uterus click here– warning though it is my literal uterus and you might find it a bit gross.

4 thoughts on “#Uterexit- The Story of my Hysterectomy”